Last revised 06 March 2017 by S. M. Gon III
Trilobites are thought to have reproduced sexually, as do nearly all arthropods today. Eggs were presumably laid, but until 2017, fossilized eggs that may be of Cambrian eodiscid trilobites had been documented only once (Zhang and Pratt 1994). It was suggested that some trilobites held eggs and/or developing young within the cephalon (as horseshoe crabs do today), and anterior median swellings of the cephalon (of the preglabellar field) in some specimens are interpreted as brood pouches (e.g., Fortey & Hughes 1998) because they appear only in holaspids (adults) and represent a dimorphism in which the swelling is the only morphological difference. Ostracods and some other crustaceans show similar brood pouch swellings, although not at the anterior of the body. Because specimens with brood pouches appear only in natant trilobites, it is possible that the eggs or protaspids were released ventrally, anterior of the hypostome. In 2017, Hegna et al described presumptive eggs in the genal portion of the cephalon of Triarthrus eatoni that were exceptionally well-preserved.

The embryology of trilobites is unknown, but after hatching and development of a hard exoskeleton (which presumably occurred at or soon after hatching) they molted their exoskeletons as they grew, as all arthropods today, leaving a record of their developmental stages. Thus, the ontogeny (patterns of growth and development) of trilobites is known only as far as calcite exoskeletons of immature stages have sometimes been preserved, recording the progression of forms that trilobite larvae and juveniles take from hatching to maturity. If any of the earliest stages lack a calcite exoskeleton, these would also escape our knowledge. The small egg size reported for Triarthrus by Hegna et al (2017), much smaller than the earliest protaspid form for that species, suggests that there may very well have been a small, pre-calcified hatchling stage prior to the first preserved protaspides. To illustrate the typical ontogeny of trilobites, consider Dimeropyge (Order Proetida, Superfamily Bathyuroidea), shown below (via Chatterton, in the Treatise on Invertebrate Paleontology, 1997):

Ontogeny and classification:
Ontogeny plays an important role in assessing the higher classification of trilobites (e.g., Fortey 1990). There is a great deal of variation of form among the protaspid and meraspid larvae of the different trilobite orders, and related families and suborders show similar immature forms. For example, most of the Asaphida show a consistent protaspid form (called an asaphoid protaspis), and this ontogenetic similarity links groups that look quite different in their mature forms (for example, the Asaphida superfamilies Trinucleioidea and the Asaphoidea). Similarly, although the three suborders of Phacopida (Calymenina, Cheirurina, and Phacopina) are quite different in their holaspid forms, they share a number of similarities during their development that are considered synapomorphies (shared derived characters) indicating monophyly (descent from a common ancester). Similar arguments were made (Fortey 1997) to unite the Lichidae and Odontopleuridae within the Lichida, though in that case, there are some ambiguities and controversy. Fortey & Owens' (1975) distinction of the Proetida as an order separate from the Ptychopariida was also partly based on the protaspid establishment of adult-like cephalic characteristics, such as a tapering glabella and a preglabellar field (as in the proetid protaspid specimen depicted above). Similarly, Lee & Chatterton (2003) showed that among the protaspides of Corynexochida, hexagonal form (above) unites members of suborders Leiostegiina, Illaenina, and Corynexochina. Immature stages of trilobites are not often preserved with sufficient detail to assist such systematic analyses. This hinders progress in clarifying long-standing questions of relationships between trilobite orders (Fortey 2001). Recent work on the ontogeny of Proetida by Rudy Lerosey-Aubril and others has resulted in advances in our understanding of the superfamilies of the Proetida, and comprehensive compilations of the literature on these and other trilobite ontogenies.

In 2017, the eggs of Triarthrus eatoni were found in an exceptionally preserved specimen out of Martin's Quarry in New York: 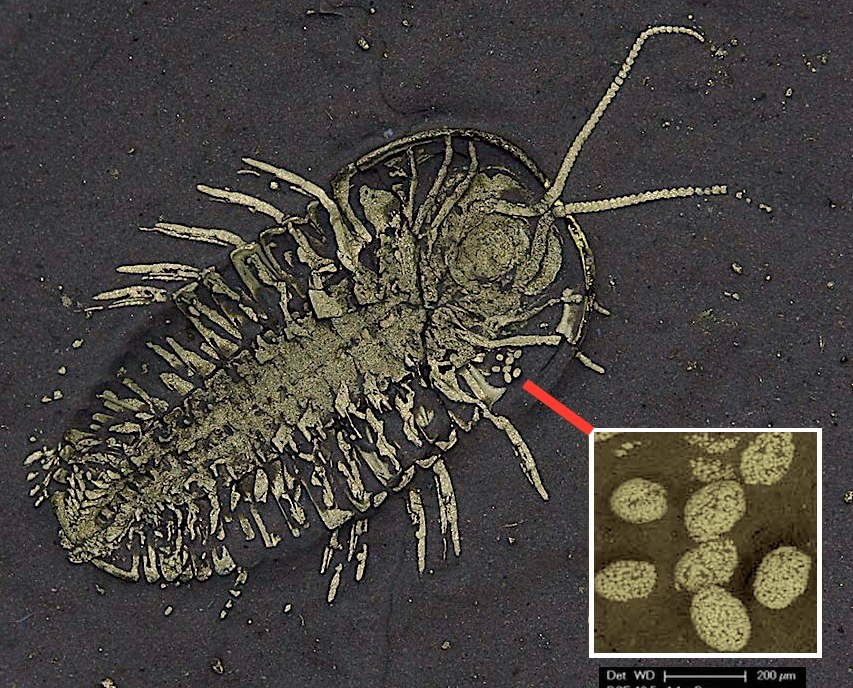 Also in 2017, Jin-bo Hou et al documented the ontogenetic sequence for the Cambrian trilobite Zhangshania typica,
which shows an interesting holaspid development of a pair of pygidial spines (see 14-17 below). 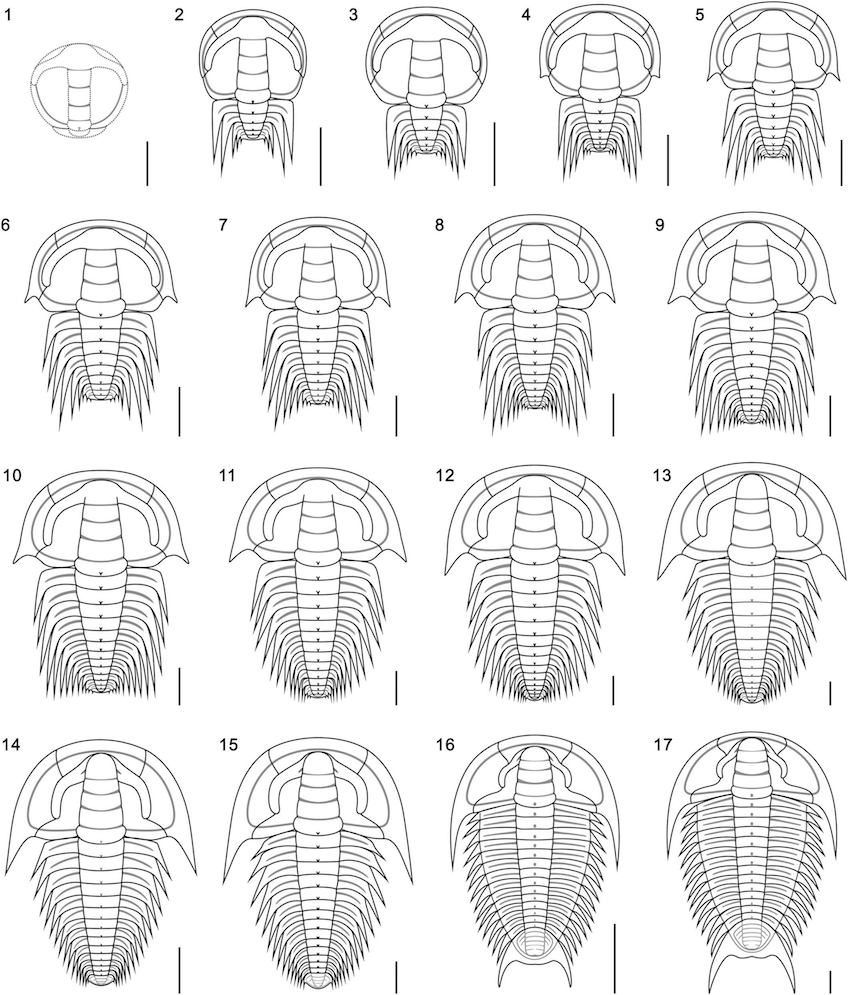 Lee, Dong-Chan & B.D.E. Chatterton. 2003. Protaspides of Leiostegium and their implications for membership of the order Corynexochida. Palaeontology 46(3):431-46.