*The chart above (and below) are based on the International Commission of Stratigraphy 2008 revision of the Geological Time Scale.
See www.stratigraphy.org for the full set of current charts in UNESCO and US standard colors. The 2014 iteration makes some adjustments
to the Era boundary dates: 541.0 for Precambrian-Cambrian, 485.4 for Cambrian-Ordovician, 443.4 for Ordovician-Silurian, 419.2 for Silurian-
Devonian, 358.9 for Devonian-Carboniferous, 298.9 for Carboniferous-Permian, and 252.17 for End-Permian. First trilobites remain at 521.

Although trilobites are the signature organism of the Paleozoic, first appearing in the Early Cambrian, their peak diversity was in the early Paleozoic, and they began a general decline in the upper Paleozoic (despite bursts of adaptive radiations in the Ordovician, Silurian, and Devonian periods), and that ended with their extinction in the Late Permian. By that time, they had dwindled to two families (Proetidae and Brachymetopidae, both in the order Proetida) and had long ceased to be a prominent feature of the marine biota. The chart below indicates changes in the diversity of the Trilobita over the periods of the Paleozoic Era, based on a figure (p 269) in the Treatise of Invertebrate Paleontology (1997) modified, especially in the Cambrian portion, via recent publications on biostratigraphy and trilobite persistence.

* Cambrian ages and stage names in international standards have not yet all been established.
All figures this page ©2009 by S. M. Gon III created using Macromedia Freehand
Extent of the Trilobite Orders over Geological Time 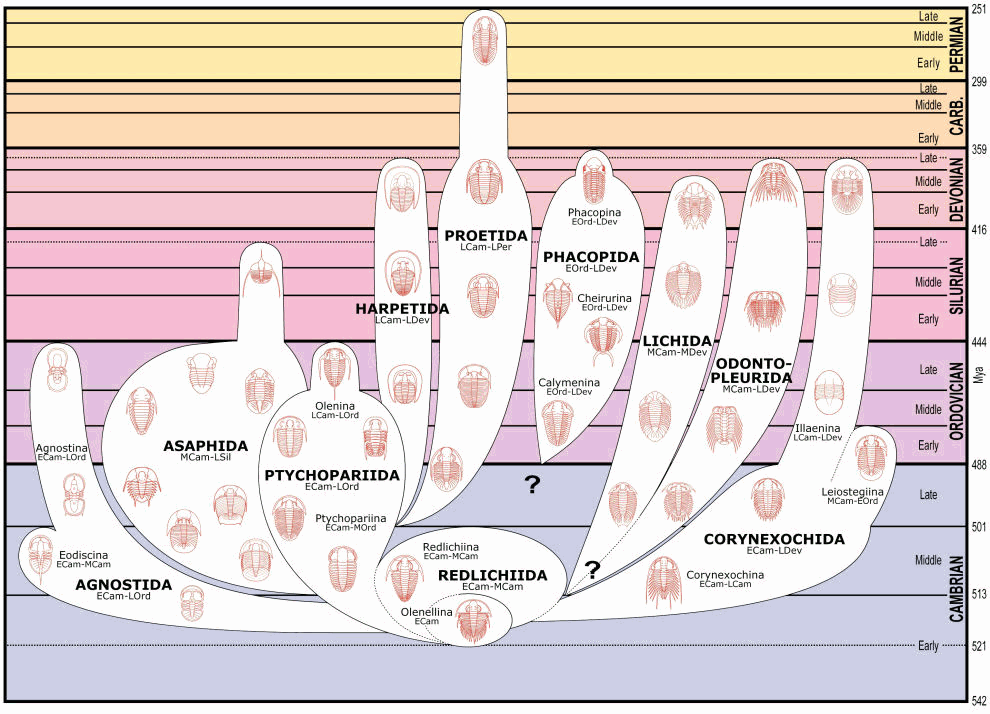 
The chart above gives an indication of the relationships of the trilobite orders, and their extent over geological time. The Cambrian origin and proliferation of trilobites is very apparent, as well as the loss of the orders Agnostida, Ptychopariida, and Asaphida in the Ordovician, the loss of the majority of remaining orders in the late Devonian, and the final extinction of the class in the Permian. The Ordovician extinction event is particularly apparent in the chart of family diversity (second chart on this page). Click on any of the order names immediately above this paragraph to learn more about each order.