Trilobite Systematic Relationships
Given that trilobites are Arthropods, what is their place among the known arthropod groups?

last revised 09 JULY 2020 by S. M. Gon III
Primitive or Advanced?
For a long time, trilobites were considered the most primitive of arthropods, since they were among the first Cambrian arthropods discovered, but this turns out to have been mistaken; an artifact of preservation. The first recorded Cambrian outcrops only preserved species with hard, shelly parts, such as trilobites, brachiopods, mollusks, and echinoderms. When the Burgess Shale, Chengjiang, and other similar Cambrian Konservat-Lagerstätten (remarkably preserved fossil deposits) were discovered, large numbers of more delicate Cambrian arthropod species (that typically do not preserve at all) were revealed as contemporaries of trilobites, rather than their descendants (see diorama below). Trilobites are now considered relatively advanced among the Paleozoic arthropods, and the search for the first arthropods and the ancestors of trilobites is pushed back into the Precambrian.


Status of "Trilobitomorpha"
In the 1959 Trilobite Treatise, many of the Burgess Shale arthropods were included in the arthropod Subphylum Trilobitomorpha. Today that subphylum is no longer considered valid -- it served as a convenient unit for various paleozoic taxa with similarities in limb structure, but has fallen aside for more rigorous analyses. One prevalent recent classification recognizes the Trilobita as a class of arthropods sitting comfortably within the Superclass Arachnomorpha (an expanded concept based on the Chelicerata), alongside the Superclass Crustaceomorpha (based on an expansion of the Crustacea), together comprising the Subphylum Schizoramia (Arthropods bearing biramous limbs) contrasting with the Subphylum Atelocerata (insects, myriapods, and allies).  This classification diagram is shown below.

While there is certainly a great deal of diversity of form among the arthropods and near-arthropods (such as the large, predatory protarthropodan Anomalocaris), it seems reasonable that shared common ancestry in the Pre-Cambrian was the basis for the radiations of the early Cambrian, such as seen at the Burgess Shale (Canada), Chengjiang (China) and Sirius Passet (Greenland). This shared ancestry and close relationship despite seemingly great divergence of form is seen in the very similar molecular biology of modern crustaceans and insects, and suggests to some workers that the Subphylum and Superclass designations for the Arthropoda may be superfluous (especially that dividing the Atelocerata from the Schizoramia).

Arachnomorpha and Crustaceomorpha
Among the diversity of Paleozoic arthropods, two large groups have emerged in recent phylogenetic analyses: a group of crustacean-like arthropods referred to as Crustaceomorpha, and a group referred to as Arachnomorpha. The diversity within the Arachnomorpha is dominated by Trilobita and Chelicerata, each forming major clades. Arachnomorpha (Størmer 1944) is equivalent to a grouping called Arachnata (Lauterbach 1983), which is defined as an inclusive grouping of non-crustacean arthropods: a clade stemming from the ancestor of Trilobita and Chelicerata. The Arachnomorph cladogram and its two major clades (sensu Cotton and Braddy 2004) is shown below.

“Chelicerate Clade” and “Trilobite Clade”
Arachnomorph diversity allows attempts to elucidate the relationships between trilobites and other Paleozoic arachnomorphs (see, for example, Edgecombe & Ramskøld 1999, Cotton & Braddy 2004). It is relatively easy to exclude a large subset of arachnomorphs that fall into a “Chelicerate Clade,” which can be generally characterized as arachnomorphs bearing a post-anal telson/tail, and a pair of limbs per segment (among other synapomorphies). The Burgess Shale arthropods Sidneyia and Yohoia are two good example members of this Chelicerate Clade (see above).

In contrast, the “Trilobite Clade” includes arachnomorphs lacking a telson, and with dorsal segments that may cover more than one pair of legs. The pygidium of trilobites is a good example of a fused single dorsal tergite covering several pairs of legs. Taken to extreme, the single-piece carapace of Tegopelte, and the two-piece carapace of Naraoia also represent this trend of decoupling of dorsal tergites with limb pairs (see below). We owe much of our recent understanding of the trilobite clade to the exceptionally well preserved assemblages of arthropods from Chengjiang, which greatly complements the assemblage from the Burgess Shale.


What distinguishes Trilobites among Arthropods?
Trilobites are the most diverse of the extinct arthropod groups, known from about 5000 genera (e.g., see Jell & Adrain 2003). The classification of trilobites within the Arthropoda has generated much controversy, much of which is still not completely resolved (see above). Whatever their higher position among arthropoda, there are a number of characters that distinguish trilobites from within its Arachnomorph clade, the most significant noted below:


Relationships Between the Trilobite Orders
The higher level classification of trilobites is an unsettled and dynamic      subject, and since Fortey's classification outline in the 1997 Trilobite Treatise, we have seen his 2001 review of trilobite classification, the 2002 splitting of the Harpetida from the Ptychopariida, and recent acknowledgement of the orders Odontopleurida and Trinucleia suggests an arrangement that looks something like the figure below.  A discussion of the evolutionary trends and relationships of the orders follows. 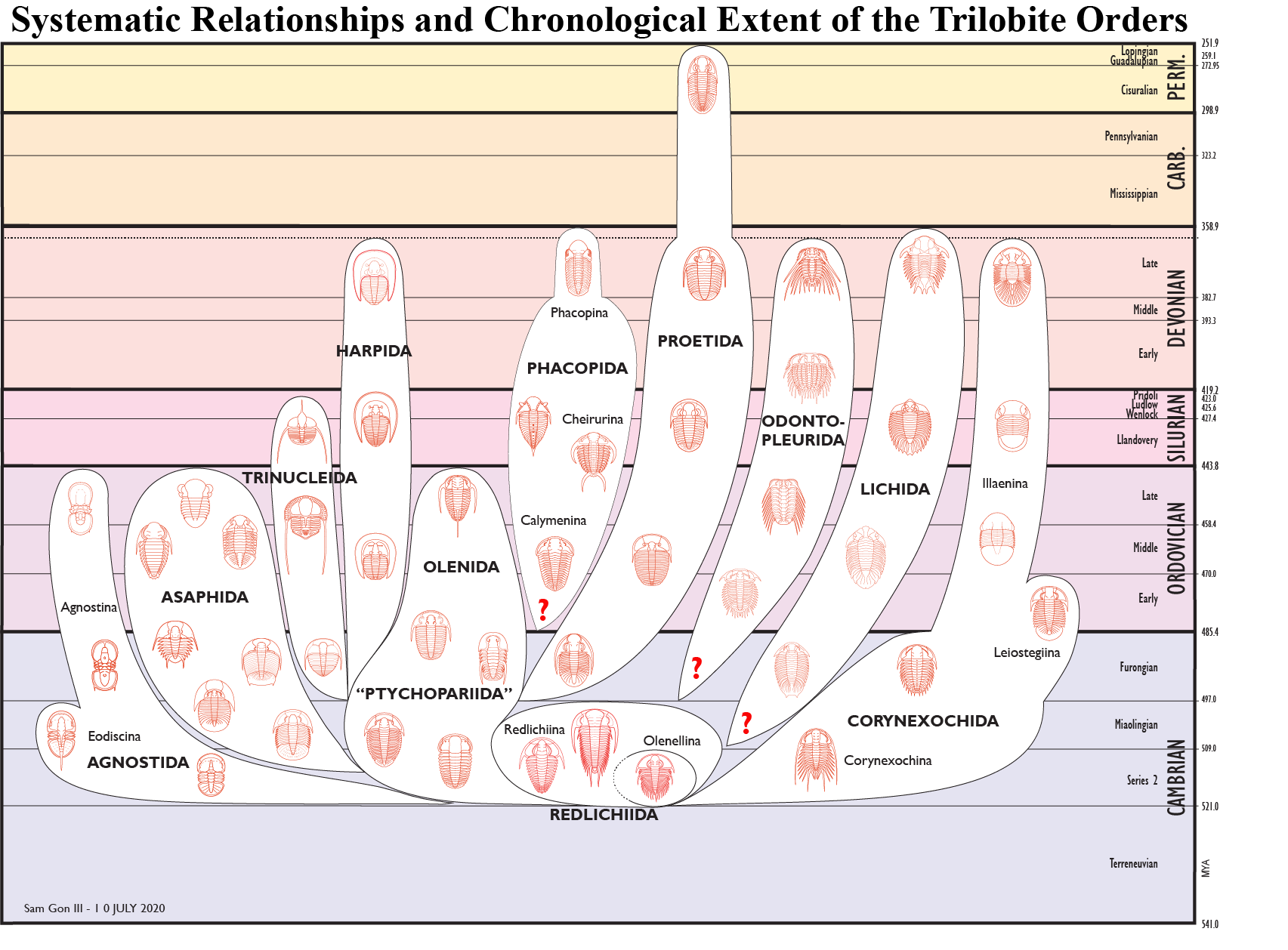 Image above ©2020 by S. M. Gon III, created using Adobe illustrator
Thanks to Nigel Hughes for stimulating discussions leading to revisions of this figure.
In June 2007, a version of this figure was published in Hughes 2007. In 2008 Odontopleurida was recognized.
In 2009 Ptychopariida established as cobasal with Redlichiida as earliest trilobite order.
By 2020 orders Harpida, Trinucleida, and Olenida were added.

The Redlichiida (particularly the Suborder Olenellina) is considered primitive, appearing in Series/Epoch 2 of the Cambrian, and not persisting into the latest Cambrian (Furongian). Members of Ptychopariida are likewise among the first known trilobites. The Agnostida appear thereafter, perhaps derived from Ptychopariida, and persist to the end of the Ordovician. The Redlichiina also give rise to the Corynexochida, in the Cambrian. The Lichida and Odontopleurida may have arisen from early Corynexochida or Redlichiida, indicated with a "?". The Redlichiida, Corynexochida, and the Ptychopariida, as large primitive groups including the ancestors of other orders, must be paraphyletic. In 2002, another order was split out of the Ptychopariida; the Order Harpida (formerly suborder Harpina of the order Ptychopariida). In 2019, Order Trinucleida was distinguished from Asaphida. Order Olenida has been proposed, but a diagnostic description has not yet been offered in 2020.

The Ptychopariida, Harpida, Asaphida, and Proetida  puportedly share (in at least the primitive forms) species with a natant hypostomal condition, leading Fortey to suggest the Subclass Libristoma for these orders combined. The recognition of Asaphida, Proetida, and Harpida as orders is a relatively recent thing; in the 1959 Treatise they were all included within the very large and paraphyletic Ptychopariida. The Ptychopariida and Harpida maintain the natant state until their extinction at the end of the Devonian, but both the Asaphida and the Proetida develop conterminant and impendent hypostomes in their advanced forms. The major extinction event at the end of the Ordovician greatly affected trilobites, ending the Olenida, Agnostida and Asaphida. The Trinucleida) are lost before the end of the Silurian and all other orders except Proetida are lost by the end of the Devonian (most in the major extinction event between the Frasnian and Famennian ages in the Late Devonian, but the Phacopidae hang on until nearly the Devonian-Carboniferous transition). The Proetida persist until the end of the Permian, the last of the orders of trilobites to go extinct. Only Order and Suborder epithets are provided above. There wasn't room for all of the superfamily figures and labels for the Proetida and Asaphida  .

The origin of the Phacopida is uncertain. The three suborders (Phacopina, Calymenina, and Cheirurina) share a distinctive protaspis type; this similarity in development suggests phylogenetic closeness. The Calymenina is perhaps the most primitive of the Phacopida, and share some characters with the Ptychopariida/Olenida (including a few species with natant hypostomes), so although the hypostomal condition of the Phacopida is typically conterminant (and impendent in some advanced Phacopina), they may have had their origins with the natant Ptychopariida (which would make the Phacopida another addition to the Libristoma). Others point out the overwhelmingly conterminant hypostomal condition among Lichida, and similarities in the exoskeleton tuberculation of Phacopida and Lichida, so the ancestral sister group of the Phacopida remains unclear, although its clade in the chart above is placed nearest to Ptychopariida/Olenida.

Important notes on the use of this figure: This diagram was initially designed by Sam Gon III, based on information available in the literature, including the 1997 revision of the Treatise, and Fortey's 2001 synopsis of trilobite systematics. The intention is to share with others interested in trilobites my slowly growing understanding of the relationships between the higher taxonomic units. Any similarity to figures published elsewhere is unintentional, and I have not seen any handling of quite this sort in the literature. Please contact me before using this image.  Any inaccuracies are entirely mine, and there may be future revisions. For example, since 1999, I adjusted the extinction of the Asaphida to the early Silurian, set the origin of the Phacopida to the Cambrian-Ordovician boundary, adjusted all of the Devonian extinctions to reflect the Frasnian-Famennian boundary, and added the small persistent tail on the Phacopida until its last family (Phacopidae) disappeared near the Devonian-Carboniferous boundary. When the Order Harpetida was recognized in late 2002, that order-level clade had to be added! In May of 2006, adjustments were made on the geological time scale to reflect the emerging treatment of the Cambrian, in which the appearence of trilobites is considered the bottom of Series/Epoch 2, and dashed lines indicating paraphyly in the primitive orders were added. In 2007, working with Nigel Hughes, a modification of this figure was formally published (see citation for Hughes 2007, below). In 2008, the diagram was adjusted to split Odontopleurida out from Lichida. I intend to make continuing revisions to this figure as I receive feedback or learn more. Thank you for your understanding!

On what basis, then, are the orders defined? No single character (e.g., facial sutures) dominates in higher level classification. Instead, such characters as facial sutures, glabellar shape and pattern of lobation, eyes, thoracic features and numbers of thoracic segments, pygidial shape, size and segmentation, and spinosity all play a role in helping define the orders. In addition, note that hypostomal conditions and shared ontogeny play an important role in defining the orders of trilobites. That is why for each of the order fact sheets, as many of the above details are provided as possible. As a synopsis, here are brief statements regarding each of the trilobite orders:


If you would like to see a listing of the families of each of the orders in phylogenetic arrangement according to the 1997 Treatise and other sources, please click here.
Literature Cited:

Chen, J. & G. Zhou. 1997. Biology of the Chengjiang Fauna. in The Cambrian Explosion and the Fossil Record. Bulletin of the National Museum of Natural Science 10:11-106.

Cotton, T.J., and S.J. Braddy. 2004. The phylogeny of arachnomorph arthropods and the origins of the Chelicerata. Transactions of the Royal Society of Edinburgh: Earth Sciences, 94: 169–193,

Størmer, L. 1944. On the relationships and phylogeny of fossil and recent Arachnomorpha. A comparative study on Arachnida, Xiphosurida, Eurypterida, Trilobita, and other fossil Arthropoda. Skrifter Utgitt av Det Norske Videnskaps-Academi I Oslo. I. Matematisk-Naturvidenskapelig Klasse 5:1-158.