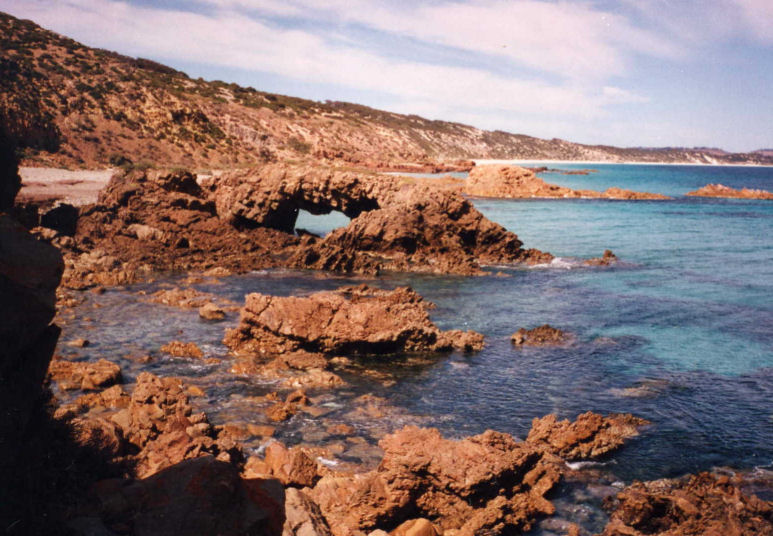 The depositional environment of the majority of Burgess-Shale-type assemblages is outer shelf, deeper water. The Emu Bay shale in contrast, appears to represent relatively shallow water deposition, indicating that soft tissue preservation occurred in a range of environmental settings during the Cambrian. Some Emu Bay fossils display extensive mineralization of soft tissues, most often of blocky apatite or fibrous calcium carbonate, but some including the oldest phosphatized muscle tissue and the first thus far reported from the Cambrian. Mineralized soft tissues are apparently rare among Burgess-Shale-type biotas.

The type section of the Emu Bay Shale crops out on the east side of Emu Bay where it conformably overlies the White Point Conglomerate. Here it yields a rich assemblage of Hsuaspis, Redlichia, hyolithids, brachiopods, and the scleritome-bearing Chancelloria. At the Big Gully locality (8 km east of White Point), its presumed correlative is unconformable on the White Point Conglomerate and yields soft-bodied fossils in addition to the trilobites, including the giant predator Anomalocaris, Isoxys, Tuzoia, the presumed worm Palaeoscolex, the problematic Myoscolex, and a number of rarer elements. The Big Gully trilobites rarely preserve any trace of non-biomineralized tissue; a small number of specimens of Redlichia have been reported with antennae.

Some trilobite specimens from Emu Bay have their soft parts preserved, as in the Burgess Shale and Chengjiang lagerstatten. Redlichia takooensis with antennae and limbs apparent are the most well-known of these. In addition to trilobites, there were other species of arachnomorph (trilobite-like clade) arthropods such as Xandarella, and Primicaris. These trilobite-like arthropods demonstrate that the group from which trilobites arose was itself successful and diverse, though being uncalcified, are only preserved at exceptional lagerstatten such as the Burgess Shale and Chengjiang. Because the Burgess Shale was the first lagerstatte with such exceptional preservation, other sites with similar preservation are referred to as "Burgess Shale type" lagerstatten.
TRILOBITA OF THE EMU BAY SHALE


*In Paterson & Edgecombe 2006, Balcoracania flindersi is regarded as a synonym for B. dailyi, while both species of Emuella are maintained.

Trilobites of South Australia, a website by Dave Simpson

Australian Trilobites: A Species List and Bibliography by Greg Edgecombe and the Australian Museum